Duinocade is a very small arcade cabinet (14cm / 5,5inch height). The software and parts of the circuit diagram based on the open source handheld Gamebunio, which based on the famous Arduino platform. The Gamebuino and also our Duinocade uses the knowns Nokia 5110 lcd as screen. Gamebunio was an Indiegogo campain and finished in July 2014. A lot of games for the Gamebuino (and so for our Duinocade also) are developed by an enthusiatic community.  You will find an overview about the available games here.

I've hacked not only the Gamebuino but also an Arcadie Dual gamedock for the case. It is much smaller als the Arcadie gamedocks of my other projects and also cheaper.

The first electronic was realized on a breadboard. In contrast to the Gamebuino we don't have an lithium battery and an USB port. The Duinocade is powered by an external (wall) power supply. The electronic fits in the slot for the iPhone. We don't have to made mechanical modifications of the case except one additional hole for the power socket.  We've mounted only an 3,3V power supply, the ATMEGA328 microcontroller, SD card socket and the Nokia LCD on this breadboard.

A DIY kit with am assembled and pre programmed PCB, the cable for the joystick unit and the stickers for the enclosure is available now. You can order your DIY kit in our webshop. 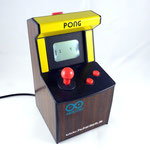 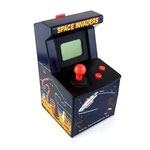 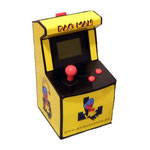 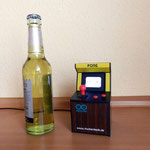 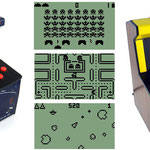 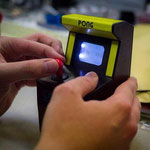 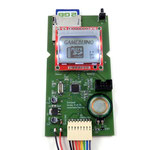 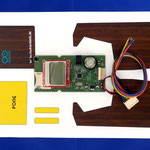 art work Pong
DIN A4 page with stickers for PONG art work to print it by yourself
Folien_Pong.pdf
Adobe Acrobat Document 109.3 KB
Download

Attention, no more shipping to private customers in the EU (except Germany) from 01.07.2021